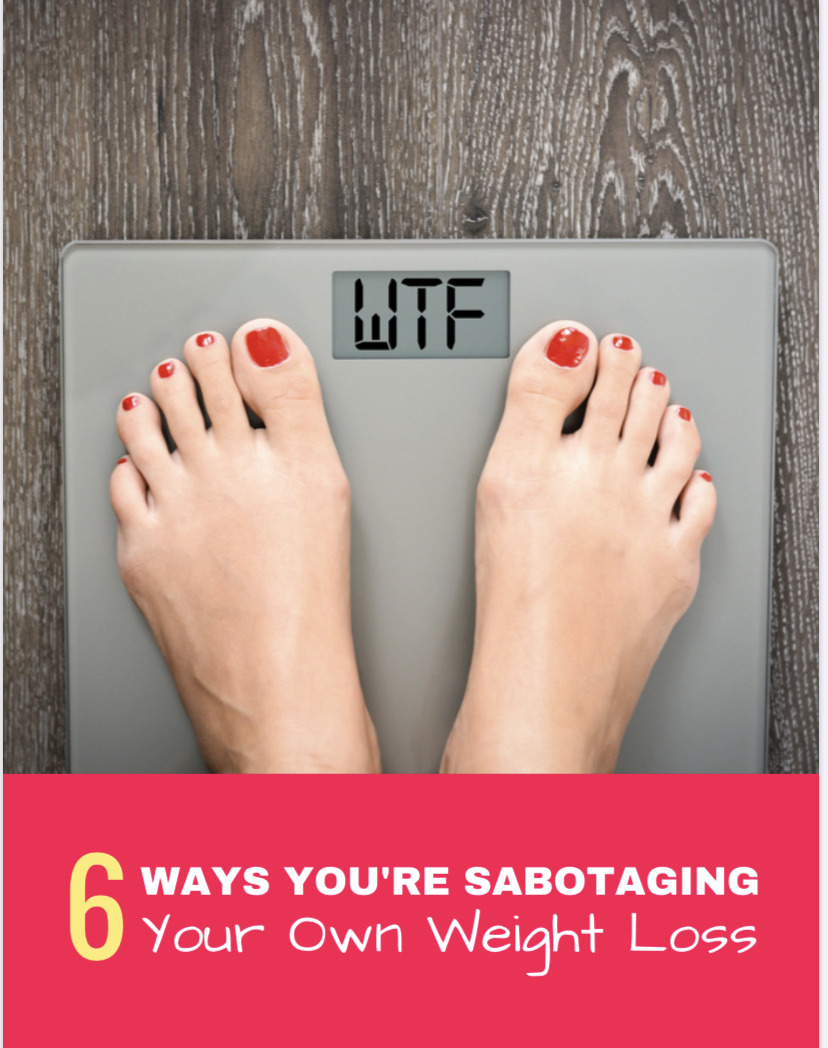 Losing weight isn't an easy process. Calorie-heavy convenience foods, sugary
confections, and soda are available almost everywhere you turn, and
sometimes it can seem like the world is conspiring against your plans to shed
extra pounds.

But there's a more insidious kind of weight-loss sabotage than the office
vending machine or free soda refills at your favorite restaurant. If you're
having a hard time getting the number on the scale to drop, it might be because
you're conspiring against yourself. Do any of these self-defeating behaviors
sound familiar?

You give up at night.

You've been so good all day. You counted every last calorie, swapped your
soda for water, and rode out your hunger pangs all afternoon so you could
have a bigger dinner. But now it's nine o'clock and your stomach is growling
again, plus you're cranky from being hungry all day. Right now the leftover
pizza in the fridge is starting to sound a lot better than the idea of losing
weight.

If this sounds like you, you're far from alone. Nighttime snacking is a pitfall for

many would-be dieters, and it can be a particularly big problem if you're over-
restricting during the day. Your resolve might hold out through the morning

and even the afternoon, but by the time the evening rolls around, you're worn
out and hungry, your willpower feels depleted, and you really just want some
takeout

One solution to this problem is to eat a little more during the day. Yes, a
smaller calorie deficit will translate into your weight loss taking longer overall,
but if it keeps you sane and prevents you from undoing your progress every
night, it's worth it. Another solution is to plan for evening snacks and choose
low-calorie munchies that won't blow your daily calorie limit. This can be a
good option if you're in the habit of nibbling on something as you watch TV or
read at night.

If you're not used to counting calories from beverages or "invisible" calories like
those from cooking oils, it can take some time to get into the habit, but not
accounting for these calories can cost you. Small amounts of food still contain
calories, and they add up. If you don't count the olive oil you stir-fry your
veggies in or the half dozen almonds you grazed on earlier in the afternoon,
your weight loss can stall.

You have a few drinks, and the rest is history.

You can have the best of intentions before a night out, but after a couple of
drinks, it's common for even the most carefully-laid plans to go awry. Being
tipsy can have the dual effect of making food taste really good and making you
temporarily forget or not care about your weight loss goals, leaving you
particularly vulnerable to the next plate of cheese fries that comes along.

If you're prone to overdoing it with food when you're under the influence, it
might be best to take a break from drinking while you're losing weight. If you
don't want to give up your nights out, try saving up calories during the rest of
the week so you don't undo several days' worth of progress in one night.

Goal-setting is an important part of successfully losing weight. But if you're
setting goals like losing ten pounds in two weeks, or if you're not a morning
person but you want to start an exercise routine that involves getting up at five
in the morning, you're just setting yourself up to fail.

Unrealistic goals like losing weight too fast are often unhealthy, and you'll only
feel discouraged if and when you don't reach them. This is a recipe for giving up
entirely and backsliding into old habits. Remember that weight loss is a slow
process. You won't be able to change all your habits overnight, so be patient
with yourself.

You throw in the towel after one overindulgence.

Somebody brought doughnuts to work this morning, and you had one even
though you didn't budget calories for it. Sound familiar? Most dieters have to
contend with the occasional unplanned treat.

While it might put you a few hundred calories behind your daily goal, having a
doughnut or a piece of pizza occasionally isn't the end of the world.

However, eating something you didn't plan for can have a strange psychological
effect. If you feel like you've messed up your diet already, you might be more
prone to calling it quits for the rest of the day, even if you end up doing more
damage that way.

It might seem like ditching your lunchtime salad for a burrito won't do much
harm since you've already fallen off the wagon, but this kind of black-and-white
thinking can actually do quite a bit of harm.

Falling off the wagon now and then is OK, as long as you clamber right back on.
But a single indulgence shouldn't set the tone for the rest of the day. A treat
won't wreck your diet, but an all-or-nothing mindset will.

You eat back your workout calories - and then some.

Doesn't it feel great to finish a sweaty gym session? Exercise is one of the best
habits you can develop - it boosts your health and your sense of well-being.
Unfortunately, though, exercise doesn't burn as many calories as you might
think.

True, many cardio machines give you an estimate of how many calories you've
burned, but these numbers are often wildly inaccurate. If you're in the habit of
treating yourself with a calorie-heavy snack or drink after a workout, you might
be doing more harm than good overall. Keep your exercise habit, but don't take
it as a license to eat whatever you want afterwards.

Sometimes you can be your own worst enemy when it comes to weight loss. It's
easy to undo days' worth of self-control in a single meal. Be aware of these
sneaky forms of self-sabotage, and look for ways you can set yourself up for
success, not failure. The world doesn't make losing weight easy, so you've got
to be your own best ally.